Starbucks is the name that comes to mind when one talks about renown coffee brands. It is an internationally recognized coffee house. With its strong, thick, and balanced aroma, it lures millions every day. Millions of its customers have connected with the logo and can recognize a Starbucks shop in a glance, thanks to the well-recognized logo.

Starbucks was founded in 1971 by Gordon Bowker, Jerry Baldwin, and Zev Siegel. All three were coffee enthusiasts and roommates. Together they started their coffee retail business which in start did not serve coffee, but coffee beans, spices, tea, coffee machines and accessories. It was later on that they started selling coffee drinks. Gordon Bowker used to travel to British Columbia to buy freshly roasted coffee beans from a supplier in Vancouver, later they switched to a vendor in Vashon. 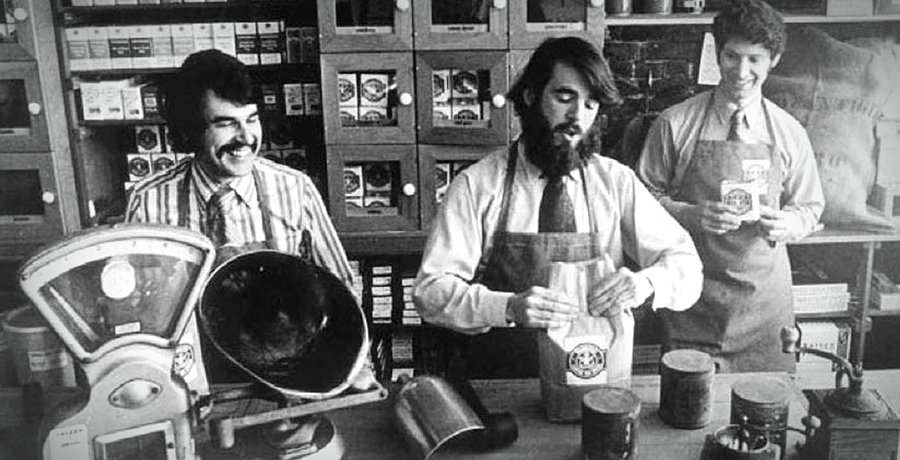 Alfred Peet was a coffee-roasting entrepreneur and he was a major motivation to the creators of the now world known Starbucks. Peet was a Dutch expatriate who had begun introducing fine arabica coffees into the United States during the 1950s. In 1966 he opened a small shop, Peet’s Coffee and Tea in California that was known to import first-rate coffees and teas. Peet’s accomplishment made Starbucks founders realize the scope in selling high-quality coffee beans and equipment. Peet became the Starbuck’s initial supplier of coffee. The partners then purchased a worn roaster and Baldwin and Bowker tested the Peet’s roasting techniques to create their own mixes and flavours.

As shocking as it might sound, Starbucks wasn’t the first choice as a brand name. The founders were heavily inspired by sea and adventure. After researching thoroughly, they came across a legendary novel, Moby Dick, written by Herman Melville. In that book, Starbucks was the title of the first mate of the Pequod. Another push for the name came from Terry Heckler, with whom Gordon Bowker was the co-founder of an advertising agency. He believed the words beginning with ‘st’ were meaningful and powerful.

The Beginning Of The Starbucks Logo

As the founders were heavily into seafaring, they wanted their logo to also represent that. They hired Terry Heckler, an artist, who we would call now a professional logo designer. Terry went over sea-related info to get inspired and that is when he came across a sea mythical creature called Siren.

That became the face of the Starbucks original logo, a two-tailed, topless, completely revealing to the naval with its hair open. The siren had a crown too. The color scheme of the logo was brown. The color brown is associated with appetite. 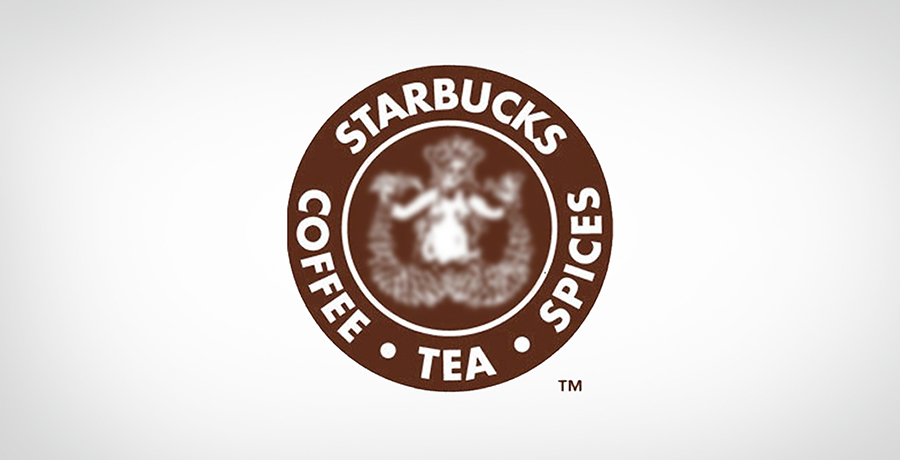 The concept behind the logo was that it was believed that the siren used to lure the sailors to the shipwreck off the coast of an island, in the South Pacific. That is what the owners wanted the logo to represent, the luring of the coffee lovers.

The logo faced many criticisms for its obvious bold and revealing nature, but it never bothered the owners.

Anti-Semitic organizations have insisted that the crowned maiden reflects the image of biblical Queen Esther, convincing that Starbucks works for and is behind various Zionist plots. Others see the resemblance to Illuminati imagery

You may find it interesting: Pepsi’s long history of logos: A lesson in modern logo design from the past

The Logo Went Through Many Changes

Siegl decided to pursue his interests in 1980 and left his two partners. Now Baldwin has the role of company president.

The old Starbucks logo design was first changed when the company got sold to Howard Schultz and that is when the Starbucks logo evolution started. Howard was originally a sales representative for hammarplast. It was a Swedish company that made kitchen appliances and housewares. Starbucks was their long term customer from where it bought drip-coffee maker for the store. He loved the idea and what Starbucks stands for that he joined Starbucks as the head of marketing in 1982.

In 1987 Baldwin and Bowker finalized selling Starbucks and Schultz was quick to take over the company and run it on his own.

Howard felt the need for a change in logo design in 1987 because Starbucks started becoming a corporation and needed its logo printed on the trucks. The logo was revealing and it was a big issue. 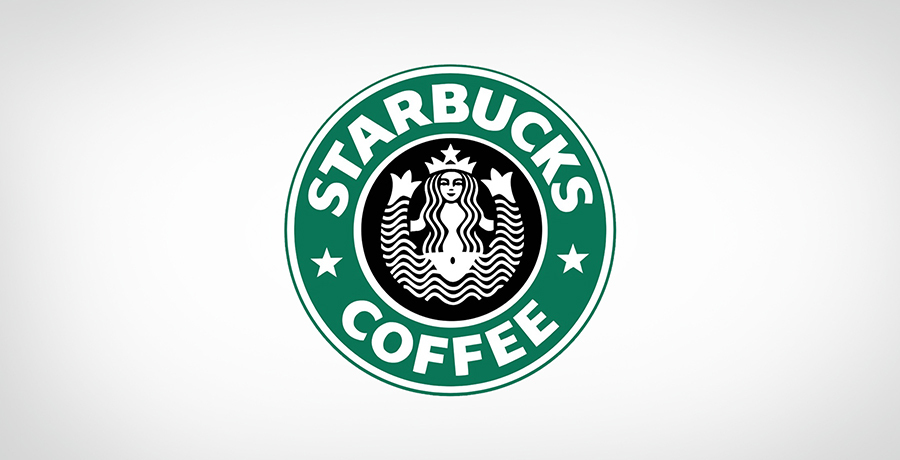 The new logo had the same Siren but with flowing hair covering the breast, with still visible naval. The green color was introduced in the logo to represent prosperity, freshness, and growth. The name of the corporation was featured in the wordmark enclosed in the circle with Starbucks written at the top in between the ring and “coffee” at the bottom of the ring. Changed from the original name, Starbucks Coffee, Tea, and Spice.

In 1992 the logo again went through changes, the image of the siren zoomed-in, removing the naval view of the siren leaving only the fishtail on view.

In 2011 on the 40th anniversary, Starbuck again went through changes in their logo. This time the wordmark and stars removed, only leaving a close-up image of the siren in green color. The siren face was made smooth with no imperfection and in perfect symmetry. However, later on, the designer decided to make it a little asymmetrical to give it a worldly beauty with a slight imperfection.

The logo was redesigned by the Starbucks home team and Lippincott. Lipincott worked with Starbucks internal design team and decided to break the circle around Siren. The purpose was to make her the face of the company. With all that brand equity satisfied, they decided to delete Starbucks and Coffee altogether.

Revealing her thought process for logo modification, Lipincott states she looked at Siren’s proportion closely. She noticed her head was quite wide and her body looked squat. When discussed with Starbucks owner, they decided Siren should be made worldly and does not need perfection.

The company’s reason for the new Starbucks logo was, they suspected consumer might get frustrated or irritated by reading the Starbucks and coffee, again and again on the logo. Moreover, the corporation planned to supply other food and drink items such as different breakfast and at night wine or beer to the visitors. For that, they needed a logo that would not create a hindrance in the future expansion of the company. This decision was received with some backlash from the logo industry and business critics.

Modifying an internationally accepted and recognized logo is a tough decision. Brands like Starbucks go through logo transformation because of a few reasons. Some of the are:

Customers look for new things. They want their favourite brand to connect with the modern world. Logo experts suggest changing and evaluating the logo every five years to check if it is still appealing to the target audience. Relying on outdated logos may affect customer interest.

An essential read for you: Logo Redesigning- The do’s, the don’ts the how’s’ and why’s

Critical Analysis Of The Starbucks Logo

Logo strategists and critics consider dropping the franchise name out of the logo as a bad idea. Corporate identity is going to get affected by using Siren’s close-up only. Experts suggest they could have dropped only “Coffee” from the logo and should have kept Starbucks.

Customers who are not familiar with the brand are subjected to confusion because of removal of Starbucks from its logo.

Starbucks should have thought through the outside perspective before dropping its name. Those who were involved in logo transformation did not consider opening the franchise in third world countries where customers will not be familiar with the brand.

Siren is a complex design and it needs the brand name with it in the logo for people to get attached with it. Starbucks was not yet ready to have a nameless logo and depend totally on Siren for brand recognition.

Mostly coffee shops throughout Europe have circular signs in the logo with text wrapped around. Starbucks also decided to keep Siren out of it hence losing the Coffee trademark from the logo.

Considering millions of Starbucks’ loyal customers’ emotions and critical review by experts, Starbucks team ran the different versions of the logo through a small panel of customers. This helped them in getting a better idea of how it would play out in the world. Starbucks emphasized on having Siren on the logo to remain on the customer’s mind. The brand has stuck to the customer’s mind now and does not need text for recognition.

As reported in BBC, the logo transformation of Starbucks and erasing Starbucks Coffee from the logo indicates the brand’s intention to move beyond only coffee and introducing new products.

Nine years later after the logo transformation, Starbucks logo is still confident in having a textless logo and brand recognition through Siren.

As soons as Starbucks broke the news of the new logo that does not have a place for “Starbucks Coffee” in it, loyal customers began reacting. Some loved and said it is now streamlined, contemporary and elegant while others said the brand name removal does not make any sense.

If you want your logo transformation and are looking for new ideas, connect with me and get your new and appealing logo made by a professional.

What do you have to say about the evolution of Starbucks logo? Leave your comments below.