“It is better to fail in originality than to succeed in imitation.” These are the golden words by Herman Melville, a famous American novelist. Every word of his statement speaks for itself and enables us to understand the value of originality. This also applies to the graphic design industry and puts a great responsibility on designers to stay original and true to their work. A designer’s job is to generate new ideas and create unique identities for brands.

However, you’d be surprised to know that the logos of some very famous modern-day brands have strange similarities with popular logos from the past. If it stirs your curiosity, keep reading and find out what is the logical reasoning behind it.

In order to further explain it, I’m going to analyze famous company logos which have been the talk of the town for being copied from the past. 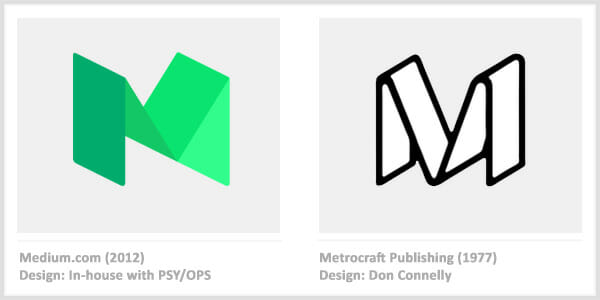 Medium, which is a publishing platform, was launched by Evan Williams in 2012. For the first three years, Medium used a bold black “M” as its brand mark. Afterward, the new logo was unveiled that represents Medium up till the present day.

New Medium logo also used letter M, but in a more stylized form. It created a lot of buzz on the internet due to its dramatic resemblance with an old logo of Metrocraft Publishing. [See the photo above]

Don Conelly designed a logo for MetroCraft Publishing in 1977. Now, would you call it a weird coincidence or Medium really copied the old logo? Both logos look the same with the only difference of colors. 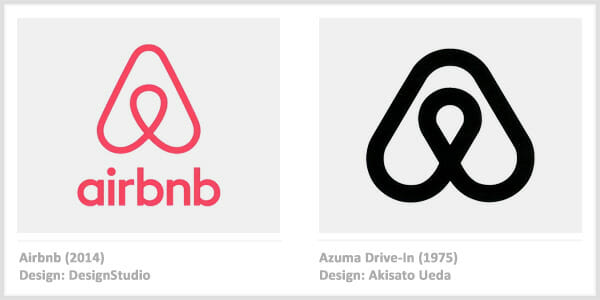 These two logos also look awfully familiar. Online market place and hospitality service Airbnb received plenty of criticism for having copied an old design. Apparently, the Airbnb logo is greater in height than the Japanese drive-in Azuma but you can’t ignore the uncanny resemblance between two designs. Azuma logo was designed by Akisato Ueda in 1975, whereas Airbnb was launched in 2008. 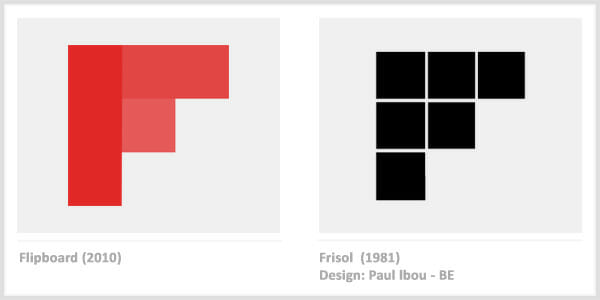 California based social network aggregation company Flipboard has a similar story as of Medium and Airbnb. Its logo has a great resemblance with the brand mark of an oil company called Frisol in 1981.

It’s really bizarre that the designers may have spent hours and months to produce the unique brand identity, but they were only able to produce results people have already seen. 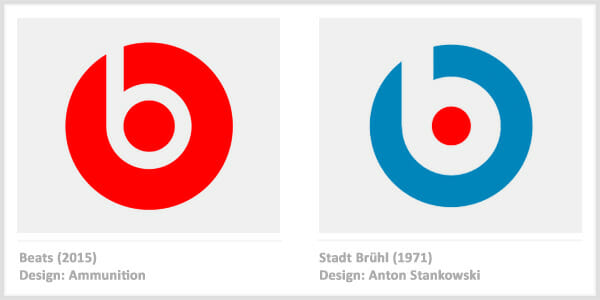 The famous Beats logo is inspired (or copied) from Anton Stankowski’s 1971 Stadt Bruhl logo. Is there a possibility that the renowned branding agency Ammunition copied the logo or created it from scratch – well the odd similarity between Beats and Stadt Bruhl makes it very confusing.

Not only Beats, but the identity badges of few other brands e.g. Bigfix, British Paints, Priority Parking, and Pagan Osborne seem to have a similar idea as of Stadt Bruhl. Did all of these brands got inspired by the incredible work of German graphic designer Anton Stankowski or worked out their own identities?

Hootsuite vs. Association of the Swedish Book Trade 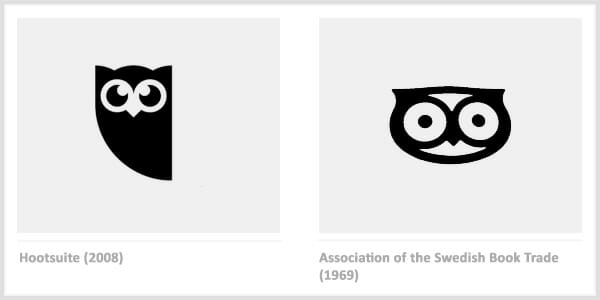 Based in Vancouver this platform for managing social media, the Hootsuite, is believed to have a similar logo as of an old Swiss company. Erik Ellegaard Frederiksen engineered the logo design for Association of the Swedish Book Trade in 1969, whereas Hootsuite came into being in 2008. Both logos feature owl images and look very symmetrical. 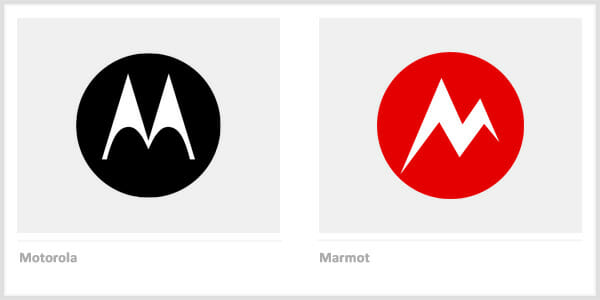 Here’s another case of presumably similar logos, which rests between Motorola and Marmot. Both companies used brand initials in their logo designs. However, Motorola came into being in 1928, while the latter was founded in 1974.

So, is there a chance that Marmot took inspiration from Motorola? Maybe. However, Marmot’s identity mark is in accordance with its business type. The company deals in outdoor apparel and that “M” represent mountains. 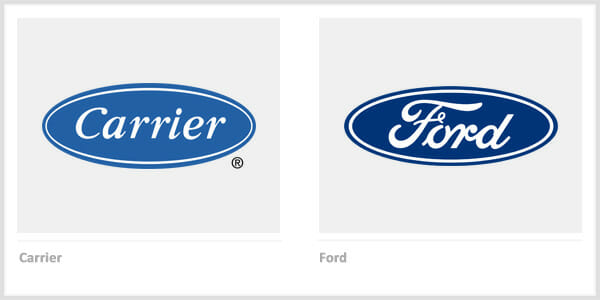 Oval shape, italic font, sorta similar color scheme put logos of Carrier Corporation and Ford Motors in this group of either inspired or copied logos. Well, both designs are not entirely identical. What do you say? You can share your thoughts in the comments section. I’d love to know your perspective. 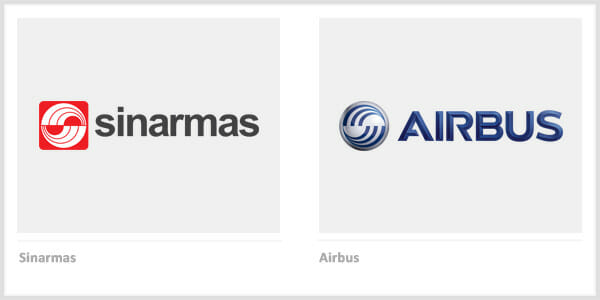 Formed in 1962, Sinarmas is one of the largest corporate groups in Indonesia. A few years later, multinational group Airbus made an appearance with a familiar logo design. Let’s take a look at the Airbus logo design:

Did Airbus really copy Sinarmas or it happens to be just a coincidence? Just remember that Sinarmas operates from Indonesia whereas Airbus is based in Blagnac, France. 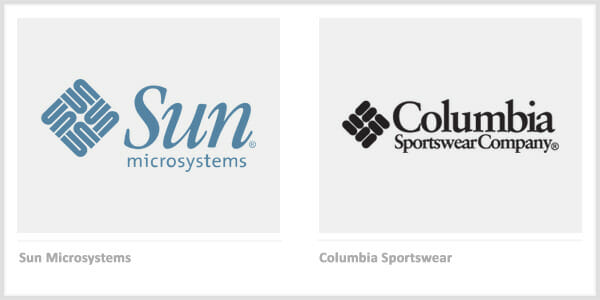 These two brand marks are not entirely the same, but the square shape gives an impression of familiarity. 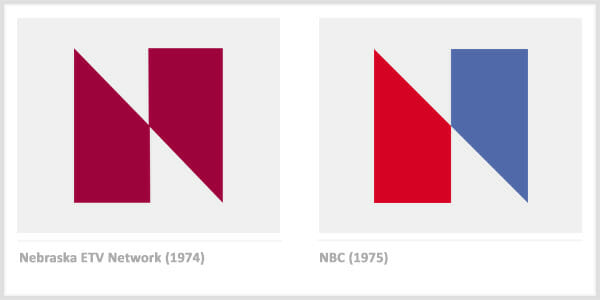 The old logo design of NBC and Nebraska ETV Network share the similar style due to the same brand initial. 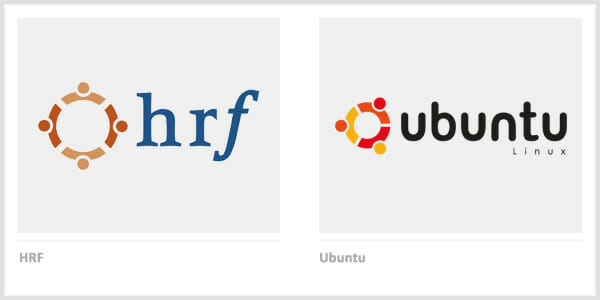 The circle shapes in Ubuntu and HRF logos have quite a few differences, but we can still draw a comparison. 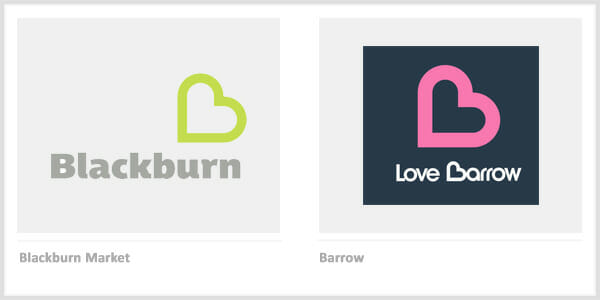 The heart sign in these two logos makes them kind of look alike. One of the logos represents a local market in the town of Blackburn, while the other is a health care brand.

Although there is familiarity among different logo designs we can’t say with 100% surety they didn’t have genuine ideas. Certain things and situations tend to influence the human mind in a similar way, and that could be the case here. Every other design can not possibly be one of it’s kind. Even after so many variations, designers can not avoid the element of similarity in some cases. We can’t achieve idealism, can we? So, cut a little slack, please.

In the end, I’d like to sum it up with the famous Greek saying that “Great minds think alike.” There is no better justification but if you have to say something, please share your thoughts in the comments section.